In the kitchen, one plus one can equal much more than three. By combining ingredients packed with umami (mushrooms! beef! tomatoes!), you can exponentially increase the mouth-filling savoriness of your final dish. Here’s an example in the form of a comforting, fork-tender stew – and with a pressure cooker, it can be on the table in less than an hour.

Here’s what to gather to feed 4-6 people:

Here’s how you make it:

Season the short ribs liberally with salt and pepper.

If you’d like, you can do this step the night before and store the seasoned ribs in the fridge. Salting early helps amplify the flavor.

Place the porcini mushrooms in a bowl…

…and cover with boiling water until softened (15-30 minutes). (Update: I don’t even soak them anymore! I just dump them in the pressure cooker!) Take out your 8-quart or larger pressure cooker or Instant Pot and melt the lard over medium high heat. Sear the ribs in batches until well-browned… …and transfer them to a platter. (I don’t even sear them when I’m pressed for time and the dish still comes out fab.) While the ribs are browning, chop up the veggies… 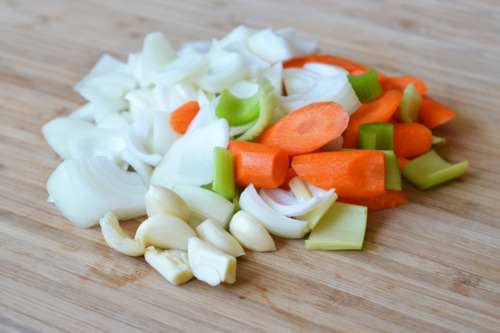 …and toss the onions, carrots and celery into the empty pot. Lower the heat to medium, season with salt and pepper, and sauté the vegetables until softened.

Fish out the softened mushrooms and squeeze out the liquid. You can reserve the mushroom water to use in place of broth, but I personally find it a little muddy tasting. 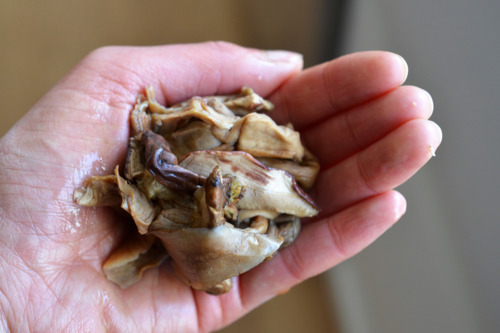 Coarsely chop up the mushrooms…. …and toss them in the pot along with the garlic. Stir the pot for another minute…

…and add in the marinara sauce, broth, and 1 tablespoon of the balsamic vinegar. Add the ribs back into the pot, mixing well. 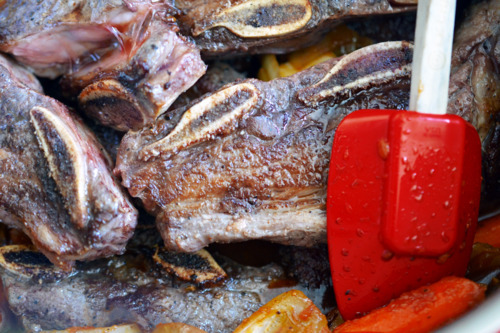 Increase the heat to high and bring the stew to a boil. Cover the pressure cooker with the lid and let the contents come to high pressure. Once the pot reaches high pressure, decrease the heat to low and maintain on high pressure for 30 minutes. (An electric pressure cooker like an Instant Pot will take about 35 minutes). Then, take the pot off the heat and let the pressure come down naturally (10-15 minutes).

When the pressure is released, add the remaining tablespoon of vinegar and check for seasoning. You can eat the stew right away, but I think it tastes much better after the flavors have had a chance to meld overnight in the fridge. Plus, it’s easier to peel off the layer of fat when it’s hardened. To reheat the stew, dump it in a pot, and bring to a boil. 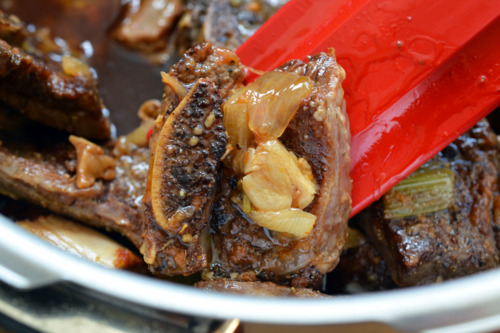 Simmer the stew for at least 20 minutes and top with minced parsley. Try this recipe – I guarantee you’ll like it. There’s no need to be afraid of pressure cookers! Looking for recipes and resources? Head on over to my Recipe Index or my Resources page. You’ll also find exclusive recipes on my iPad® app, and in my cookbook, Nom Nom Paleo: Food for Humans (Andrews McMeel, December 2013).

Best Home Shopping Reviews is a free resource for everyone who loves to shop Online through in-depth reviews of smart home and outdoor products, housewife, health and beauty, for kids, tools, ect. Read more privacy policy us and how we are supported by affiliate commissions.

PATIO, LAWN & GARDEN R. Robert
0
The top pellet smoker grill in the market are clever in their design, and they have won praise from many. However, some people prefer to use a charcoal grill, a gas grill, or an...
Read more

PATIO, LAWN & GARDEN R. Robert
0
Cooking with wood and charcoal is one of the most exciting summer and summer flavors you can have with meat. The best charcoal grills is less expensive than gas, creating more smoke, carbonization, like steam, hundreds...
Read more

Home Gym Equipment For Women R. Robert
0
Working out on a indoor spin bike has many advantages that other types of stationary devices cannot offer you. Nevertheless, it is essential to choose a machine that you will enjoy exercising on. In...
Read more

PATIO, LAWN & GARDEN R. Robert
0
Your favorite baked goods are indispensable in summer picnic trips or cooking in the garden with family and friends. Along with a gas grill is right for you. As we know that the best propane...
Read more

PATIO, LAWN & GARDEN R. Robert
0
If you are looking for something to get serious about having a leisurely backyard weekend, one of the first items you should put on your "buy" list is a high quality natural gas grill....
Read more
Home Shopping is your news, shopping, entertainment, fashion, health, product reviews and more ... on the web. We provide you with the latest news and product reviews videos, purchase guides so you have the most overview of the products you should buy, what is best for your family. We are one for all (the US and European markets) geographic location is no longer a barrier, we will bring you the most comfort when shopping at home.
© Copyright 2019 by besthomeshoppingreviews.com. All Rights Reserved
MORE STORIES